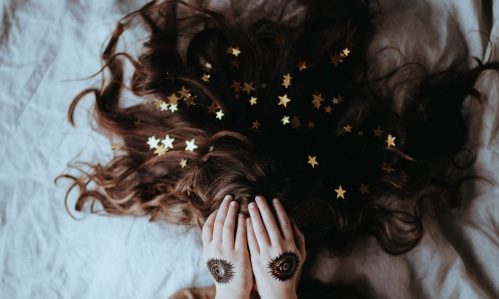 If I concentrate, I can still make out the shape of a crocodile in the wood panelling of my old bedroom at my parent’s house. If I stare long enough, other animals begin to emerge from the graininess like nocturnal creatures yawning back to life after dusk. I could have told you once where all the animals were hiding. I recall it was always a triumph to discover a new one, which I would eagerly add to my menagerie.

When I tell people that I spent two and a half years in bed with Chronic Fatigue Syndrome (CFS), the general response is bewilderment. It is unfathomable, especially given that I couldn’t read or watch television or listen to music without feeling like a physical presence was pressing down on my chest. Not to mention the sickness, like a perpetual hangover, that would flood my body on any exertion. The only exercise I could tolerate was walking to the toilet and back, and my mother would push me in a rickety wheelchair she’d hired from the pharmacy to get me to medical appointments.

The question I often get asked by people is how did I stay sane during this period. I respond by telling them about my version of Where’s Wally and searching for animals in the woodwork. It’s a simplistic answer because the truth is always more complicated. Nonetheless, it symbolises what I least expected to find being confined to a bed.

Prior to CFS, I spent a decade trying to elude an anxiety disorder. If I worked hard, played harder, moved house again, changed careers, I thought I could hoodwink the terror. I would go one way and eventually it would go another. I wholly underestimated its tenacity. By the time I was thirty, I couldn’t remember the last time I’d experienced a genuinely happy moment. For that matter, I couldn’t recount the last time I’d cried. My body eventually freed itself from the tyranny of living fast by having a complete physical breakdown.

Christmas Day 2000 marked the first day of being bedridden at my parent’s house. While my health had been declining over the year, virtually over night I went from someone suffering moderate fatigue to being completely immobilised. I’d done enough research on CFS to realise I was probably in for the long haul.

Lying flat on my back, the days toiled by in slow motion. As the weeks clocked into months, my frustration turned black with depression. Eventually my tears arrived riding a loud and guttural howl. Doubled over, with each wretch of emotion I thought I would die from the despair it brought.

In the dark and interminable spaces of my bedroom, I found all of the emotions I’d misplaced throughout my life. The anguish of leaving a long-term relationship in my 20s, the shame and anger of childhood hurt, the sorrow of losing myself completely and utterly for over a decade. Under the emotional rubble, I also rediscovered a child-like awe.

Through my window I watched the summers rust into autumn and marvelled at the season’s showy colour palette. When the air turned crisp like snow, the currawongs arrived to feed upon the orange bulbs of Tamarillo just metres from my window. It took a week for the birds to strip the tree of fruit, but I always missed the spectacle when it was over.

I became fascinated with birds during my time in bed, as though observing them closely would grant me wings of my own. When a domesticated cockatoo came to sit on a branch outside my window, and garble in its limited vernacular, it felt like a miracle because I was so desperate for company. At night, I began to dream of flying and the inexplicable sense of buoyancy I experienced provided me with a window of hope.

Over time, I began to take notice of all the small creatures around me. The huntsman spider I named Spingy who found a home with me in my bedroom during the warmer months. The insects adorned in chic orange and black exoskeletons that would encircle my bedside lamp at night. The animals in the woodwork that I would search for and count on a daily basis.

It took me ten years to fully recover from CFS and I’ve never forgotten the claustrophobic terror of being bedridden, nor the anguish of missing life as it reaches milestones without you. But what I also gleaned from this time is that some of the best living we do is when we are still. Whether in our wretchedness or our joy, there is always something to discover. And when I see a simple act now, like my two ducks plunging excitedly into a clean bath, I always take the time to sit, watch them and marvel at their delight.

Image by Annie Spratt on Unsplash

Karla Dondio is a freelance writer who produces feature articles and marketing content for both print and digital channels. Her main focus is Menopause, Mental Health, Workplace Wellbeing, and the Mind Body Connection.